Commonly known as coke, flake snow, toot, blow, nose candy, liquid lady, speedball, crack, and rock.
Derived from the coca plant, cocaine is usually sold as a fine white powder (hydrocholride salt). The powder can be dissolved and injected into a vein, or kept dry and sniffed through the nose. Sniffing, also called blowing or snorting cocaine is the most popular method used. Pure cocaine is odourless. However, most cocaine is adulterated in some way or “cut” with different fillers.
Crack, the street form of cocaine, is processed into rock-like crystals that are heated to produce vapors. The vapors are then smoked. The drug was dubbed “crack” because of the crackling sound it makes when heated.

Regardless of how you get cocaine into your body, the drug is dangerous–and addictive.
As a stimulant drug, cocaine increases the amount of dopamine (a chemical associated with pleasure) production in the brain. And causes excessive amounts of the chemical to build up. This build up of dopamine results in the euphoric effects of cocaine.
Cocaine presents a threat to the body, both physically and psychologically. And with repeated use, cocaine users can develop a tolerance towards the drug, and they are unable to achieve the same “high” like the first time they used the drug. This causes dependence.
When a tolerance is developed, addicts often increase doses or mix cocaine with other drugs or alcohol. Mixing cocaine is dangerous, and can result in death.
Its highly addictive nature poses a threat to even the casual user, as a single dose is sufficient to elicit a strong addiction, causing them to become dependent.

Cocaine Use in India: 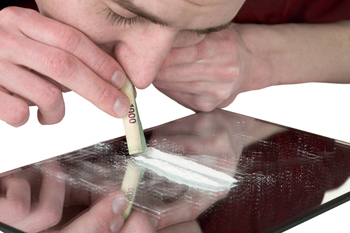 One addict said, “The first time you take it, you get a totally different feeling – you feel like you have to do it, you cannot live without it”.
Cocaine dependence in India generally revolves around the elite economic class. The drug has taken on a certain status symbol, increasing its popularity and availability.
Read more about Cocaine as a status symbol in India.

The following signs and symptoms are indicative of cocaine addiction:

Abusing cocaine can have the following effects on your body.

Cocaine dependence is a major problem. Cocaine’s effects and even unknown side effects such as coming from a wrong cut can be deadly. However, with the amount of centres rising that will treat cocaine addiction, there is hope. Rehabs.in offers a large directory of centres that will treat cocaine addiction.
Learn more about the effects of cocaine.
Learn about other types of drug addiction.
Learn about different types of addiction.

Crystal Methamphetamine
Crystal methamphetamine—probably better known as "crystal meth", or just "meth"—is a white crystalline drug abused by people of all ages. Meth users experience a sudden "rush" of pleasure, strong feelings of confidence, hyperactiveness and energy for as long twenty-four hours... Learn More
Charas
Charas - A Comprehensive Guide India is emerging as a country with widespread drug problems. The figures of drug abusers have leapt up, and the pattern of consuming psychoactive substances has also undergone changes over the years. The hazardous use of... Learn More
Ecstasy
Ecstasy What is Ecstasy? For Rs 1,200 per pill, Ecstasy remains a drug primarily abused by the upper class and by those "forced" to pay the high tab due to a developed addiction to the drug. Ecstasy is the street... Learn More
Marijuana
Marijuana What is Marijuana? Also known as ganja, pot, herb, grass, kif, weed, Mary Jane, reefer, skunk, chronic, boom, and gangster; Marijuana is a drug commonly abused throughout India. A blend of stems, seeds, and leaves from the cannabis sativa... Learn More
Find Help Using Our Platform