LGBTQ+ Do’s and Don’ts: A guide to being a better LGBTQ+ Ally.

We are a generation that is determined not to repeat the mistakes of our forefathers. We are not sexist, we are not racist, and we do not body shame; in short, we are “woke”. Yet when it comes to being a true ally to the people of the LGBTQ+ community, why is it that we find ourselves lost? The answer to that is how we were raised. In school, the only pronouns we learned were he and she, our bathrooms to date in most public places are for him and her and the belief in the unshakeable assumption that if you are born with sexual organs of a particular gender then you belonged to that gender. It takes time to unlearn these assumptions and prejudices and we are here to guide you on how you can become a better ally to the people from the LGBTQ+ community. However, before we get to that, let’s familiarize ourselves with the term LGBTQ+

What Does LGBTQ+ Stand For?

The LGBTQ+ acronym stands for Lesbian, Gay, Bisexual, Transgender, Queer. The addition of the “+” sign to the acronym acknowledges that there are people of non-cisgender and non-straight identities that are not included in the current acronym. These terms are fluid and are constantly evolving as we learn more about sexual identities and orientations.

Let’s learn about the don’ts first

Only when we know where we are going wrong can we go about making the right choices. Here are some of the don’ts for being an ally of the LGBTQ+ community.

Don’t put up with LGBTQ+ phobic jokes: Not all jokes are funny, especially ones that pick on a person’s sexual orientation or identity.

Don’t link certain traits to specific sexual orientation: Don’t assume all gays are fashionable and all lesbians are funny.

Don’t “out” a person if they have not revealed their gender identity or sexual orientation yet: This is absolutely important as you may expose them to prejudice and sometimes even abuse.

Don’t use the wrong pronouns: Not everyone identifies as he or she. Always ask what pronoun they identify with and use it. If you slip up, let them know it’s an honest mistake and that you are learning. They will understand.

Don’t make yourself a hero: By being a friend to the LGBTQ+ community and making them a part of your life you are not doing anything out of the ordinary. So don’t put yourself on a pedestal and brag about how many LGBTQ+ friends you have.

Don’t ask personal or stupid questions: Following is a short list of questions you should never ask people from the LGBTQ+ community.

The Dos of being an LGBTQ+ Ally

There are many ways in which you can be a great ally of the LGBTQ+ people. These simple dos will not just make you a good friend to your LGBTQ+ acquaintances but will make you an all-round better human being.

Do listen to what they have to say: Keep an open heart, open mind and open ears. By truly listening to them, you will educate yourself and understand their struggles, their opinions, and their experiences, all of which will help you be a better friend.

Do make your workplace LGBTQ+ inclusive: Address the phobia or prejudices your colleagues may have against the LGBTQ+ community. Make sure that your HR doesn’t reject someone because of their sexual orientation or gender identity.

Do support the idea of gender-inclusive bathrooms: Many people from the LGBTQ+ community do not feel comfortable using gendered bathrooms. This could be due to their own inner struggles, fear of violence or a physical inability to use gendered bathrooms. The reason could be varied, but everyone deserves a safe space for such a basic nature’s function.

Do respect their chosen name/pronoun/identity/orientation: You would not like anyone to ask you, “what makes you a man or a woman, right? So, assume the same for them and respect their choice.

Do become inclusive in the way you speak: Instead of just he/she and her/him, learn to also include it/they/them in your vocabulary. Let your work presentations, projects, party toasts and speeches inclusive of these pronouns. 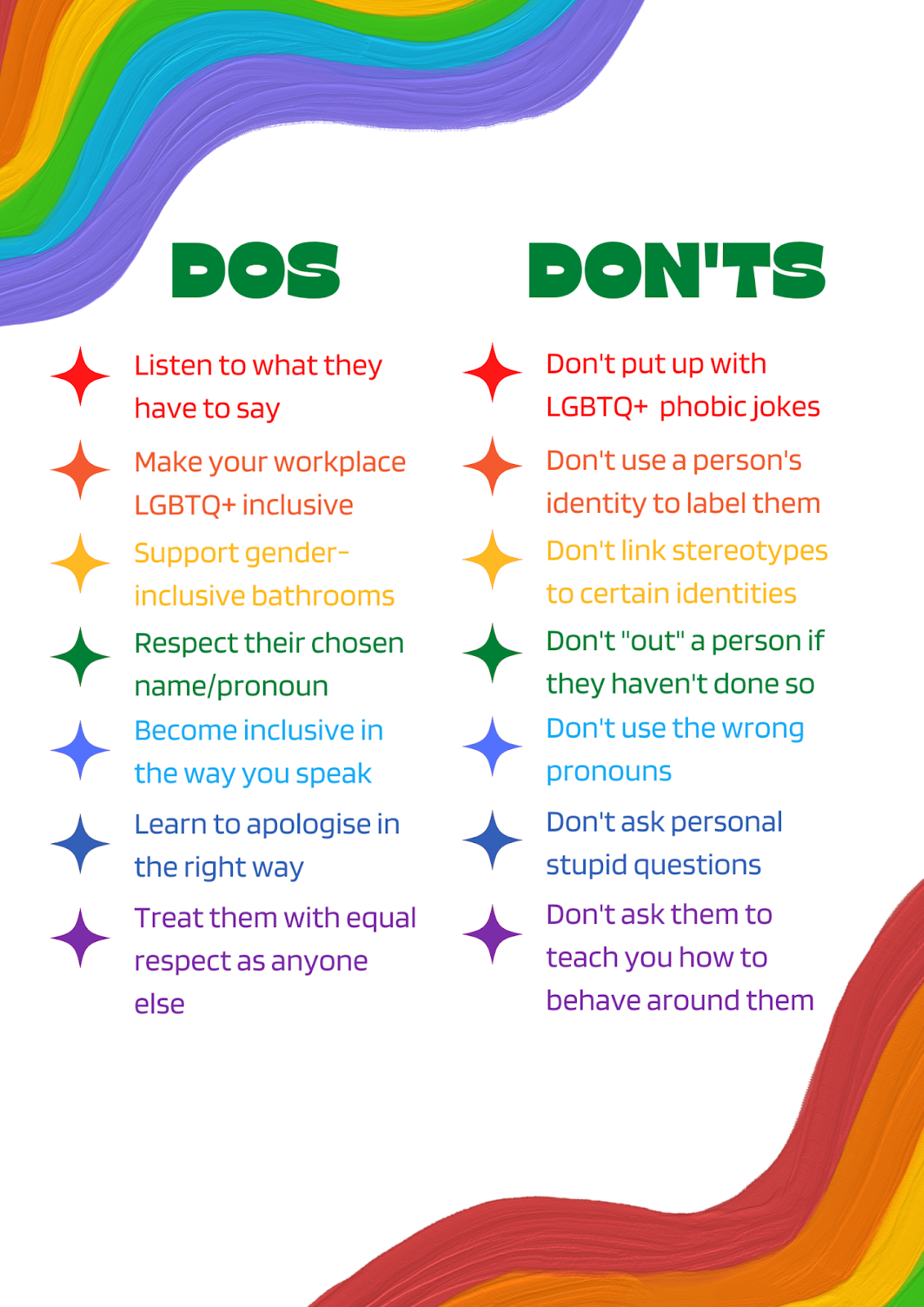 Do learn to take criticism and learn to apologize the right way: We all make mistakes but it’s important to learn from them. Also, make sure your apology is concise and heartfelt. Don’t make a public apology just to show off that you are an ally of LGBTQ+

People from the LGBTQ+ community have to navigate prejudice, hate, phobia and even abuse and violence on a daily basis. Various scientific papers and reports corroborate the fact that many people from the LGBTQ+ community suffer from depression, anxiety, suicidal thoughts, trauma and other psychiatric conditions. They are also more likely to abuse drugs and alcohol as a way to escape the social stigma they face.

The onus is on us to make real changes. We need to train our medical and mental health professionals to treat LGBTQ+ people without prejudice. Our teachers need to learn that the world is not just divided into he and she but also it/they/ and other fluid pronouns that may evolve over time. Our lawmakers need to come up with stringent laws against acts of homophobic/transphobic violence and illegal procedures like conversion therapy needs to be dealt with harshly.

In conclusion, we all have prejudices. It is a safe assumption to make that we as humans have a long way to go before we become a truly inclusive society. Hence, it is absolutely essential to start on this journey now. You, I and the people around us can make a huge difference in how society accepts and embraces people from the LGBTQ+ community.

Castelo. N. DOs and Don’ts when being an LGBTQ+ ally. www.mygwork.com

Jubenvilll. H.  LGBTQ+ dos and don’ts. A guide to being respectful and inclusive of LGBTQ+ community members. Edmonton federation of community leagues.

Nigudkar. A., Wandrekar. J. (2020, April) What Do We Know About LGBTQIA+ Mental Health in India? A Review of Research From 2009 to 2019. Journal of Psychosexual Health

Rajnandini is a psychologist, keen on bringing awareness and uplifting the stigma attached to mental health in India. She completed her Master’s in Psychology with considerable experience with people with addiction problems. She co-initiated an online counseling platform during the pandemic to assist people with their rising mental health concerns. She is also working on various research projects and likes to spend her spare time making illustrations.