This story was written by Sankalp Rehabilitation Trust and can be found on their website. You find out more about Sankalp by going to their website or checking out their listing page. 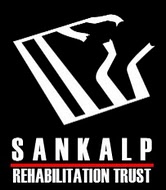 Meena walked in, dressed in white, her long black tresses tied back in a ponytail, carrying an assortment of files, folders and registers. 18 month old Armaan was at her knee giving her an imploring look. “I hope he wasn’t too much trouble,” she said to the members of the Women’s Drop-in Centre at Grant Road. She took her little bundle of joy into her arms and planted a few kisses on his plump little cheeks.

“Sorry madam,” she addressed me, “But I have to administer the medicine to these women, if you’re not in a hurry.”

I watched her at her desk, diligently filling out her register and giving out the dosages of the drug control medicine. “I really hope I wasn’t an inconvenience. Come sit.” She smiled, her face betraying her violent past and her courageous road to recovery.

Meena spent her childhood in Goa. Her family made a living by selling homemade liquor, which exposed her to drugs and alcohol at a very tender age. Disturbed by her unsupportive family, shocked by an uncle who attempted to rape her, frightened by the prospect of being married off and distraught by the onset of puberty, she left home one night, never to return.

She came to Mumbai and spent her teenage years on the streets.1993, she started smoking ganja (marijuana) and soon enough got addicted to the effects it had on her troubled life. To fuel her habit she worked as a domestic servant, indulged often in petty thievery. What started out as a few trade transactions now advanced to full fledged peddling of a variety of substances. The sharp person that she was, she learnt the tricks of the trade in no time and was practically carrying on an independent business of her own. It was by accident that she developed an addiction to garda (Brown sugar, which is a crude and cheap from of heroin) after someone mixed it in her dose of ganja.

She found love around this time, in a man from the streets like herself and they got married. Meena hoped to start afresh but the couple split shortly following the death of their first born child. The trauma of it all pushed Meena to the edge until she got a call from a rehabilitation NGO. She pulled through the treatment and therapy fairly well. She began domestic work with a family in the Northern suburbs, who supported her in spite of knowing all about her addiction and her successful recovery. But this was not to be. Her family members came back to disrupt her life that she had so laboriously put back together from pieces.

It was the year 2000. Meena had a relapse. This time, her addiction was frightfully intense. She believed that nothing could break this vicious cycle of addiction but the substances themselves. She resumed her previously lucrative business and had built a dependence and tolerance of an incredibly alarming level. It was the year 2005.In this grim scene of despair entered Sankalp. Having already gone through a similar experience of failure and relapse, Meena was not very keen on getting involved in rehabilitation again. But the counselling and sharing at Sankalp infused in her a new hope, an eagerness to pave the way to recovery. She knew that none of this was going to be easy by any stretch of imagination. But her willpower and hard work got her through the treatment. The effort did not go unnoticed, her honesty and integrity was already an example to many of her counterparts at Sankalp. Consequently she was appointed a peer counselor at Sankalp. She has been working here ever since, trying to change lives in the same way that Sankalp changed hers.

“It’s my duty now to inspire others to find their path to recovery. This is my life now, this is my goal. Of course there is also my family, my little boy Armaan and his father, my husband.” She said, referring to the man, also a recovering addict himself, whom she fell in love with and got married to after much deliberation and consent from her counselor.
Taking 13 turbulent years of addiction in her stride, with a new life and new hope, Meena goes on. Her story is an inspiration indeed.

“I hope Jesus is on my side and gives me strength to raise my son well and fulfill my goal” she says.